Sometimes planning a journey to 1 destination becomes 3, and sometimes flights to 3 destinations can turn into 8.  This was one of those times!

I had plans to visit Amsterdam and Vienna in mid-December, but I also wanted to squeeze in a trip to Iceland with my partner before the Holidays. It made sense to group them all together somehow, but because I was flying in December, there were some limitations with routes. I noticed carriers like Easyjet and Ryan Air had very limited dates of travel so it’s important to keep scouring the web for deals before. All prices listed in this post are in Canadian dollars.

Amsterdam is lovely. And not because I’ve never eaten more sweets on a trip before. The charming restaurants, canals and bike culture make for a new adventure with every turn. I paid $488 for the flight from Toronto with one stop in Keflavik in between.  I stayed at a small hotel but met other travellers who were renting houseboats on the canals via Airbnb, and vowed to do that next time. Visiting the museums was on top of my list, and worth it. As was getting cake with an edible version of The Scream.

Amsterdam has a great Indonesian food scene, and I really wanted to try Rijsttafel which is a dutch word for “Rice Table” and really is a table full of food.

I met up with a friend there who recommended a restaurant with great ratings called Indrapura. Starving from travel, we ordered Vegetarian Rijsttafel for 2 people (about $35 each), and I’ve never seen more delicious food in my life. That didn’t stop us from finding dessert on the walk to our hotel though. If you haven’t tried Poffertjes, they’re sort of like a pancake but spongy and fluffy and dusted with icing sugar or sometimes cinnamon…mmm. A great warm, sweet treat on a cool night.

Next stop, Vienna! My friend was joining me from Amsterdam to Vienna, and our options were between the train or plane. I debated between taking the train and spending a day or two in Germany, but the airfares actually worked out to be cheaper. The cheapest flight was under $100 with Ukraine Airlines but it meant leaving the EU to go all the way to Kiev, and then come west again to Vienna. This was risky because the flight was delayed getting to Kiev, and there’s a security checkpoint in between which made us risk losing our connection. I got a lot of exercise but made it on my connecting flight (barely) to chase the same sunset to Austria.

Vienna is pretty magical, especially before the holidays. When we checked in, the concierge must have felt we needed something to perk us up and offered us 2 free tickets to a concert taking place down the street. You can’t turn down free music in the city of music, so of course we went. That was just the first of many ceiling pictures I took on this trip. I’ve

heard Vienna is for architecture lovers, but you really have to see it to believe it. I’ll post about things to do in Vienna soon, but if you visit in late fall or winter try to visit the Christmas Markets! Some of the larger ones are in front of City Hall and the Natural History Museum. Schönbrunn Palace also has a Christmas Market on their grounds. Even though there isn’t as much greenery at the palace in December, I guarantee you’ll still see some beautiful views.

My next stop was Iceland to meet up with my partner for a week, but I wanted to see one more city I’d never visited before. Something that sported sights, history, and opportunities to see art. I also wanted it to be on an easy route to get a cheap flight to Reykjavik. At the last minute, I decided on Oslo.

The flight to Oslo was $257 from Vienna with a changeover in Brussels where I filled my time eating chocolate. The added benefit of flying north was finding a cheap deal with Norwegian Airlines from Oslo to Reykjavik – just $65!  I wanted something small and simple because I would only be spending about 8 hours asleep in the room, so I came across Citybox Oslo which was the most affordable. I’m not kidding when I say small, see picture on the left taken from the hallway, but it had all I need. Everything, including check-in, is self serve here but it had free Wi-Fi and was a short train ride away from the airport.

Oslo is one of the world’s most expensive cities, and my wallet definitely felt that while exploring. If you’re a fish lover, there are many fresh and probably delicious restaurant options for you. Fellow Veggies on a budget, don’t fret! There are always cheap eats to be found. I saw a few Indian restaurants come up on google maps which looked affordable.

There’s also things like Rice Bowl. I only had a day, so all I needed was a sandwich for lunch and a curry for dinner,  and my snacks in between came from a Christmas market. A day isn’t enough to see most of the city, but I was glad I had a little taste of it (especially the Munch Museum and National Gallery) before flying off to Reykjavik!

The next morning, I slept in because it was so dark outside I must have thought I was back in Canada. Unfortunately, that gave me less than an hour to get to my flight! Because the trains are so fast, and because it was morning, there was no security lineup so I made it just in time (again).

If you have an early morning flight and can’t check into your Airbnb or hotel until later in the day, visit the Blue Lagoon before heading to Reykjavik! There are buses that go straight from the airport to the Blue Lagoon, and after the spa another bus will take you straight to the city bus terminal in Reykjavik.

For some stunning 360 degree views of the city (like the picture at the beginning of this section) visit the tower of Hallgrímskirkja church. The benefit of going in winter is the soft light for most of the afternoon, but be aware that the sun sets earlier than 4:30pm. Admission is around $10. 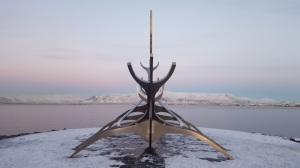 The Sun Voyager is an outdoor sculpture that is free to visit and it also comes with stunning views of the sea and mountains. It’s an ode to the sun that also contains meanings of undiscovered territory, progress and freedom. A short walk away is Harpa which is also a great stop for public art lovers. This is a short walk from a row of restaurants and shops. If you like spas as much as we do, it’s also a good idea to keep your bathing suit on you, and save a map of public swimming around the city. Here’s a list we used to help gather some options and wound up sitting in a hot tub almost every night.

Lots of people choose to rent a car in Iceland. I know when we go back in summer that we’ll do the same. For winter travel, I highly recommend going with a tour operator if you plan on visiting a glacier or ice caves outside of Reykjavik.  On the left is a picture I took of the roads covered in a thick layer of ice that our tour driver maneuvered because of the thick chains around the tires. You could do the Golden Circle independently in a rental car if you visit at the beginning of winter, but it’s just too unpredictable in the heart of the season. Our tour operator was Extreme Iceland and we did the Three Day Tour of Jokulsarlon, Golden Circle and Ice Caves. The cost did sort of balance out all the low budget flights I took, but I have zero regrets because it was one of the most memorable experiences. You can read more tips and learn about the tour and our Airbnb experience in Iceland here.

flight home to Toronto was only $206 and booked via Icelandair. All in all, my flights for the whole trip cost under $1200.